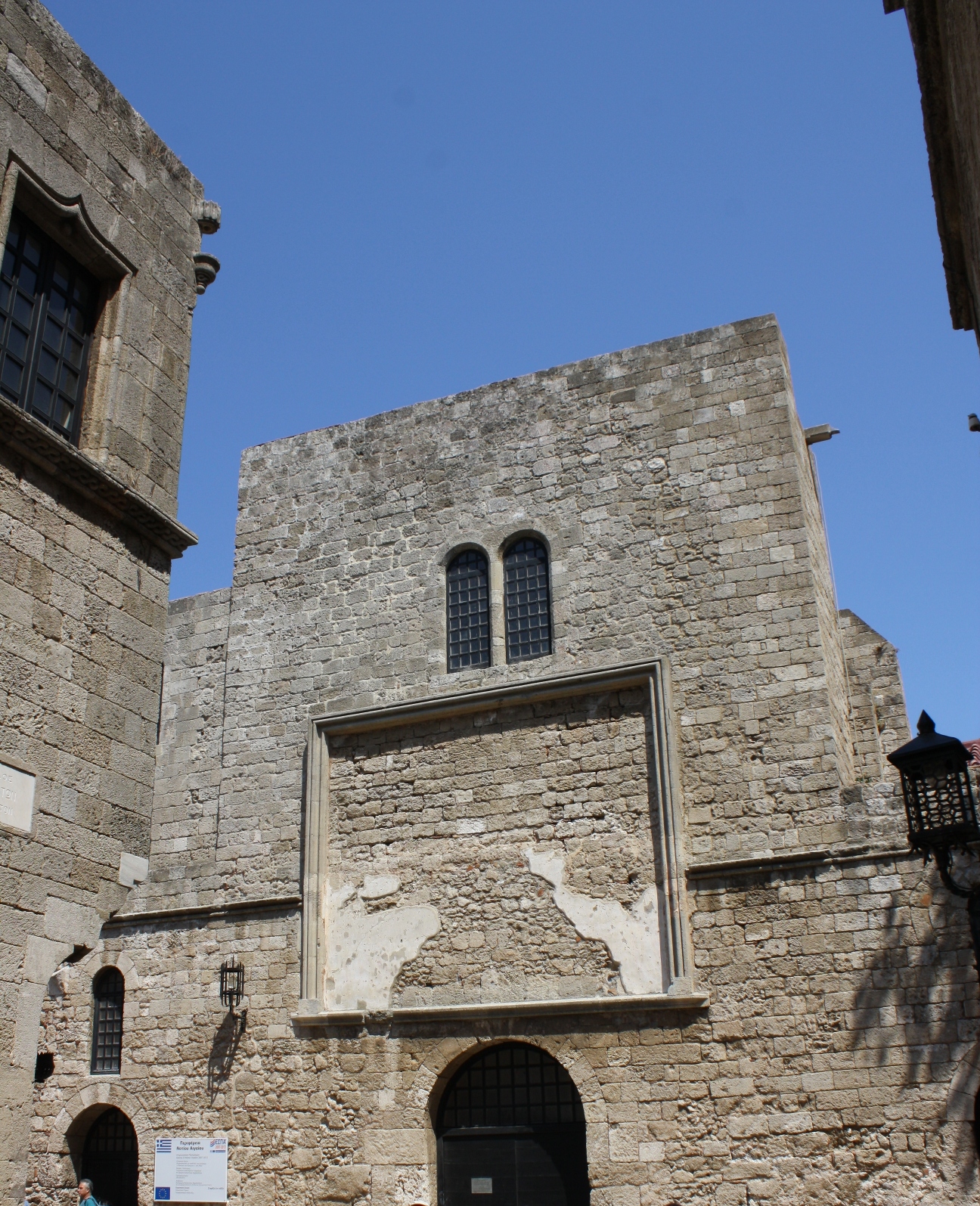 Churches that were turned into mosques

It is located on Museum square, also known as Alexander the Great square. It was built in the 11th century and is the oldest and biggest temple that can be found today within the walls of the Medieval Town. In its original form, it belonged to the archaeological type of cruciform registered temple with a dome, which was then modified into a three-aisled basilica with gothic crossed arches in the middle aisle during the knightly period. The temple had different usages through the passage of time. Originally it was an Orthodox metropolis dedicated to Virgin Mary, then – during the knightly period- was established as a Catholic metropolis with the name Sancta Maria Castelli Rodi. The ottomans transformed it into a mosque known as Enderum mosque or Kantouri and finally today it is a byzantine museum under the Archaeological Service’s supervision.

It was established by the order Knights of Saint John and therefore it was dedicated to the catholic denomination. In its original form it was a one-room church covered by a unique arch. During the ottoman siege it was transformed into a mosque. An ellipsoid dome that covers the monument today is the only thing left from this last transformation. At the main entrance’s lintel, which is on Ippoton street, one can see the Crest of the Holy See surrounded by the Crests of the Tongue of England. The building, that probably belonged to the Language of England, was established between 1365 and 1374 A.D. During the 15th century and for an unknown reason, the building was conveyed to the Tongue of France. From the interior frescos few remains are preserved today due to the profound intervention by the Italians. On the archway, one can see the rare pictorial theme of God’s Throne. The fresco depicts God on his throne, holding his crucified son in His arms. This is a western type variation of Agia Triada’s (Holy Trinity) theme. The name of the church was given due to this theme. The fresco also depicts Virgin Mary, Saint John the Baptist and some Bishops. It is dated from the end of the 15th century and the beginning of the 16th.

3. The ruins of Saint John’s of the Knights Catholic church

The ruins are located across from Grand Master’s Palace. On December 27th 1522 A.D., the day the Knights officially handed over the island’s command to the ottomans, sultan Suleiman the Magnificent prayed at this church which later on became the most important Muslim temple, the Great Mosque of Rhodes. The temple was a three-aisled gothic basilica with a wooden roof. The temple was destroyed by an explosion. This was caused by lightening hitting a barrel of gunpowder forgotten in the basement. The Metropolitan church of Virgin Mary’s Annunciation was built based on the patterns of this temple.

It is located on the western section of the Medieval Town on Apolloniou street. The disposition of three wings of cells, the church on the perimeter and the yard in the middle, is a characteristic of the byzantine monastery architecture. The church has four recesses with a dome (14- 15th century), built on top of an older post-byzantine church. At the eastern part of the yard there’s an atrium dated from the 5th or 6th century. That rare type – in the Hellenic region -, the construction’s high quality and the morphological elements of the local technique, are the elements that give great value to the monument. This monument is a sample of the Rhodian Knightly architecture. During restoration work it was revealed that the entrance’s doorstep was an architectural part showing Virgin Mary praying between two angels. Today the finding is exposed inside the church. During the ottoman occupation the monastery was turned into a seminary (Medrese) given the name “Chourmali” and the temple into a mosque. Later it was operated as a girl’s school by the Ottomans and on the 20th century it was transformed into houses for poor families. The monastery was restored by the Italian Archaeological Service during the Italian occupation. The monastery received an honorary distinction from Europa Nostra in 2006.

It’s located on the southern part of Socratous street, right across from Suleiman’s mosque, inside the Medieval Town of Rhodes. A three-aisled church (14-15th century), dedicated to the Catholic denomination, was located in the area of the Old Mess. It was probably destroyed during the ottomans’ first siege in 1480 A.D. and then by an earthquake in 1481. The only remains from the original church are a stone column of the south colonnade and a column’s base of the north colonnade. Between 1480 and 1522 a small one-room church was built over the ruins and in 1522 sultan Suleiman the Magnificent founded a poor house (Imaret). New buildings were added used as warehouses or kitchens. Conversions were made to the church and the altar’s arch was turned into an oven. Restoration work was held from 1986 till 1999. Today the complex is used for art exhibitions, play ground and restrooms.

It was recently discovered and is located southwest of Omiros street. It can also be reached by Andronikos Street. It consists of the church and a yard on the north side, the main area of the temple on the northeast side and the cells on the east side. It is obvious that the monastery’s yard is located where today the “Medieval Town Theater” is found. This monastery, from the order of Augustines, was one of the most important Catholic churches on Rhodes. Recent excavations brought to light an older one-room church of the 14th century which was probably the reason why Dragonino Clavelli added a chapel at the north side in the 15th century dedicated to Agios Nikolaos and was used as a burial area for his family. During World War II, a bomb destroyed half of the church and its surrounding area. After its restoration, the church was used as a private home up until recently when the Archaeological Service of Rhodes took exclusive ownership of the building.

It is located at a sidestreet by Omirou street right next to the walls. The church is dated from the 15th – 16th century. It is a one-aisle temple with a pointed arch. In 1522 the temple became a mesgit (little mosque) and was given the name Alagia Tekkia or Tecche and later on Borasani Mesgit. On the northwest side a minaret was added later on. South of the temple there’s a mausoleum where Burasan Ali Baba, sultan Suleiman’s chief bugler.

It is located on the south part of the Jewish district inside the Medieval Town. It’s a three-aisled basilica type church, built in the 14th century. An examination of the building and the fresco phases suggest that it used to be a one-room church and more aisles or chapels were added through the passage of time. Soon after the Ottomans invaded the city, the church was turned into a mosque given the name Ilk Michrab (first praying cavity). It is believed that this one was the first Christian church that became a mosque in 1522. The monument suffered severe damages from a bombing in World War II, it was roughly repaired by the locals and was totally restored by the Archaeological Service of Rhodes.

Can be found in Leontos Rodiou square. It is a crucifix formed temple with a dome, with frescoes (dated from the 15th and 16th century) on the west side. It was given the name Dolapli after its transformation to a mosque.