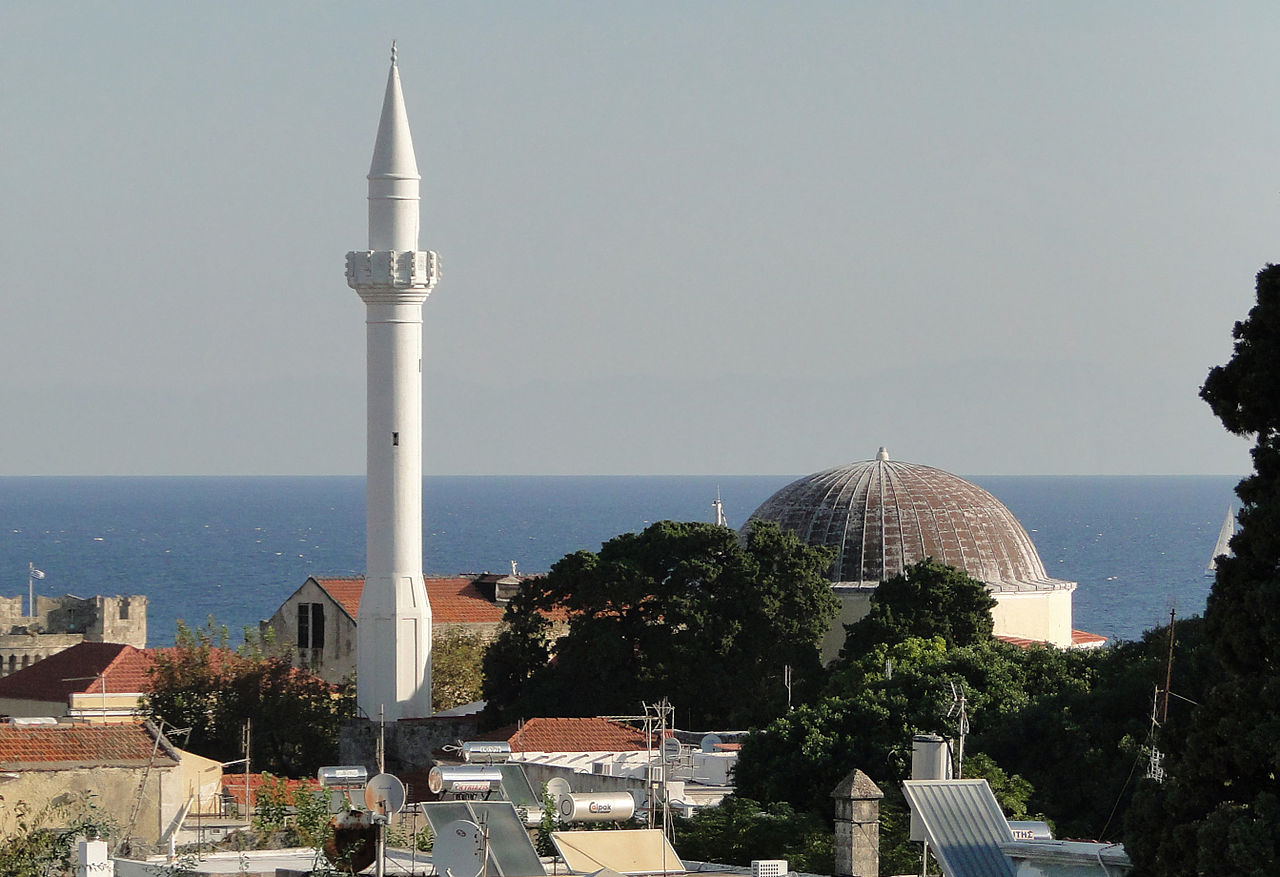 It’s in Platonos square near the bazaar in Medieval Town. The marble sign on the main entrance informs us that it was built in 1540- 1541 A.D. by Suleiman. Therefore, this mosque is the oldest one on Rhodes island. It consists of a large square building, with 12- side dome and two consecutive porches on the north side. The minaret is located on the northwest side of the mosque and it has an octagonal fountain.

In Arionos square, in the courtyard of Suleiman’s Turkish baths. According to a marble sign it was built in 1764- 1765 by sultan Mustafa. It is a very tall square building with a dome in the middle, navicular arches on three sides and two hemispherical arches on the north corners. The pyramidal exterior shape of the building is very impressive with its octagonal fountain in front of the mosque. Today the Muslim community of Rhodes still uses this mosque for ceremonies.

It is located on top of the Medieval Town’s hill at the end of Socratous street. The mosque consists of three square spaces. One of them is bigger than the others and taller (15 meters) covered with domes and two consecutive balconies on the north side. Between the central and the western dome there’s a minaret (34,5 meters) with two balconies. It was built in the 16th century by Suleiman the Magnificent. The monument received an honorary distnction from Europa Nostra in 2006.

It is located on the first floor of a building on Socratous street. It’s oblique position in comparison to Socratous st. (facing towards Mecca) led to the angular projection of the mosque which is supported by a column that can be seen in the middle of the street. The wooden minaret has a roofed balcony that ends up to a stoned stairway. The view is exceptional from the top. The exterior look of the building was based on the same architecture as the byzantine mansions built in the 18th century. It suffered severe damages in 1863 from earthquakes and was repaired in 1875. New repairs were made in 1948 after the 1944 bombings. These last repairs also altered the interior decorations. The last restorations took place in 2004.

Can be found on a sidestreet by Socratous street, near Ippocratous street and “Thalassini” Gate. It is built on the first floor of a building above shops. During the Knightly period, St. Sebastian’s church was located in that area. Sinan Beis built the mosque on the ground floor which was later burnt. In 1888 a new mosque was built on the first floor. It has an octagonal floor plan and is covered with a dome. A small terrace created above the balcony was used as a minaret. The mosque was restored in 2004.

Can be found on Dorieos square. It was built in 1588 and is the most important ottoman building. Persian ceramics can still be seen on the exterior. Its interior is luxurious with Quran verses on the walls decorated with enamel. The founder’s sarcophagus is on the eastern side of the mosque. Unfortunately this mosque cannot be visited due to maintenance in progress.

It’s right across from the Prefecture building. It was named after Suleiman’s admiral who was killed during the town’s siege and he was buried there in a tourbe, a type of a round mausoleum. Today it is still a mosque and is used as a cemetery. Many famous people were buried there while they were exiled in Rhodes.